Start a Wiki
A chapter MVP is a customized MvVP that must be killed as a chapter requirement in the Storyline. To distinguish between chapter MVPs are the regular time-spawned ones, the chapter versions have brackets around their names and do not leave tombs:

To summon a chapter MVP, you must kill a certain number of mobs in that MVP's map. After killing a chapter MvP, there will be a server-wide announcement saying:

The regular time-spawned versions do not count toward quest/chapter kills and have thicker HP bars. 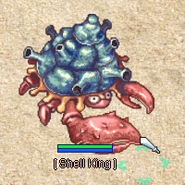 Shell King
Add a photo to this gallery
Retrieved from "https://experience-ro.fandom.com/wiki/Chapter_MVPs?oldid=5713"
Community content is available under CC-BY-SA unless otherwise noted.