Naght Sieger is a Mini Boss that drops

After the first time completing all 99 floors of the Endless Tower, including defeating Entweihen Crothen at the rooftop, a character can talk to the Lucid Crystal on the upper-right corner of the rooftop. The first time talking to the crystal would teleport the character back to Alberta. 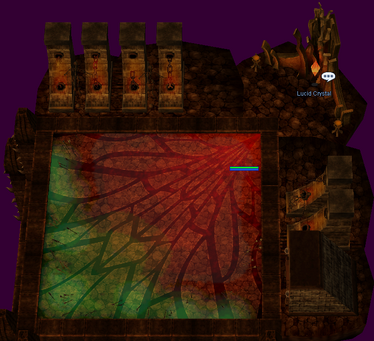 After the 24-hour Endless Tower instance cooldown, the character can do another run of Endless Tower. This time, after clearing the rooftop, talking to the Lucid Crystal would have a voice teleporting you to a strange galactic environment.

If you follow the path, it will lead you to a castle where many monsters will be summoned. After all the waves of monster summons are cleared, the mysterious voice will reveal its identity. That's when we find out that all along, the creature behind the chaos is the one and only... Naght Sieger.

Note: Naght Sieger does not have a card in ExperienceRO as it is a pre-renewal server. However, you may view the renewal card here.

Retrieved from "https://experience-ro.fandom.com/wiki/Naght_Sieger?oldid=3963"
Community content is available under CC-BY-SA unless otherwise noted.